Sam Humphrey is an Australian actor from New Zealand background. He is popular for playing- Tom Thumb in The Greatest Showman(2017), Jai in Jeremy the Dud(2017), James Udagawa in Neighbours.

Sam Humphrey was born in 1994 in New Zealand. He lives in Victoria, Australia. 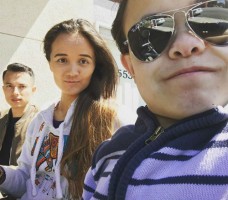