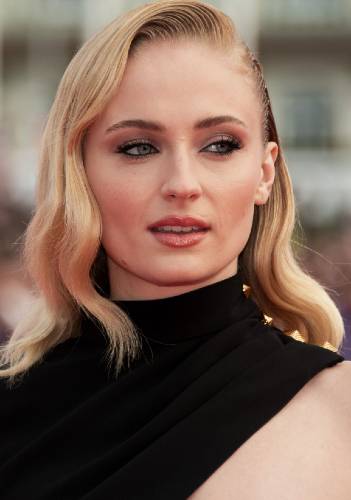 Sophie Belinda Jonas aka Sophie Turner is an English actress. She is known for playing Sansa Stark in the HBO action fantasy series Game of Thrones.

The Primetime Emmy Award-nominated actress is known for playing Jean Grey / Phoenix in X-Men: Dark Phoenix(2019), Jean Grey in X-Men: Apocalypse (2016), Josie in Josie(2018), Jane in 'Survive' among others.

She has recently appeared in the TV series 'Princess Bride' as Westley, in 'Broken Soldier' as Penelope.

Sophie Belinda Turner was born on February 21, 1996, in Northampton, Northamptonshire, England to Sally Turner and Andrew Turner. Her family moved to Chesterton, Warwickshire when she was two years old. She grew up in Chesterton in an early 19th-century house near Leamington Spa. 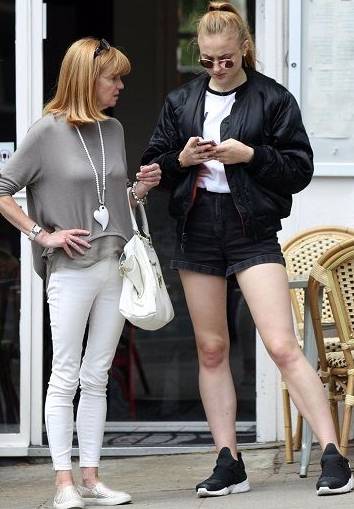 [Sophie Turner with her mother Sally]

Her father Andrew Turner worked in a pallet distribution company. 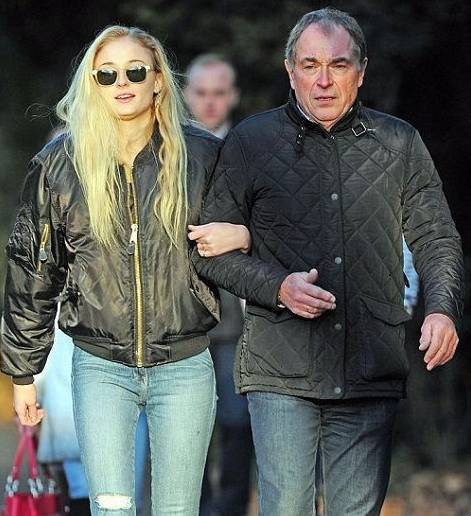 [Sophie Turner with her father Andrew]

Sophie has two older brothers. Sophie had a twin brother who died before birth (in the womb).

Dating: Sophie and Joe started dating in 2016 after talking to each other through Instagram DMs(Direct Message). A common friend of their's insisted that they approach each other.

Engagement: Sophie and Joe got engaged in October 2017.

Wedding: Sophie married singer/ songwriter Joe Jonas of the famous pop-rock band 'Jonas Brothers' on May 1, 2019, at 'A Little White Wedding Chapel' in Las Vegas, Nevada in a surprise wedding, the two had filed for a marriage license at the Clark County, Nevada the same day. It was right after the 2019 Billboard Music Awards, where the Jonas Brothers performed three songs- "Jealous", "Cake by the Ocean", "Sucker".

Sophie and Joe dated for about 3 years before getting married. Sophie expressed that she was surprised to be marrying at 21, Speaking of her marriage to Joe, she said:

"I was fully preparing myself to be single for the rest of my life... I think once you’ve found the right person, you just know."

Sophie lives in Los Angeles, California, and has changed her name to Sophie Belinda Jonas (as per the marriage certificate) post the wedding, however she still remains Sophia Turner in her professional life.

Marriage Vows repeat: The couple took marriage vows again in front of the family and friends on June 29, 2019, in France. Sophie's co-star from Game of Thrones, Maisie Williams, was one of her maids of honor. Joe's brothers- Nick and Kevin Jonas acted as groomsmen.

Joe is seven years older than Sophie. Sophie was the inspiration behind the song 'Hesitate' penned by Joe (as a love letter to Sophie) and performed by the Jonas Brothers in the album 'Happiness Begins' 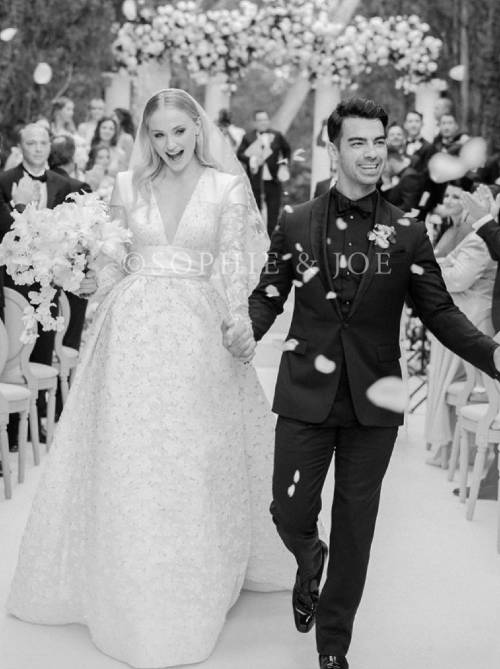 JustJared broke the news on February 12th that Sophie and Joe were expecting their first baby together. The couple was seen walking together in the Park with Sophie's pregnancy clearly visible. 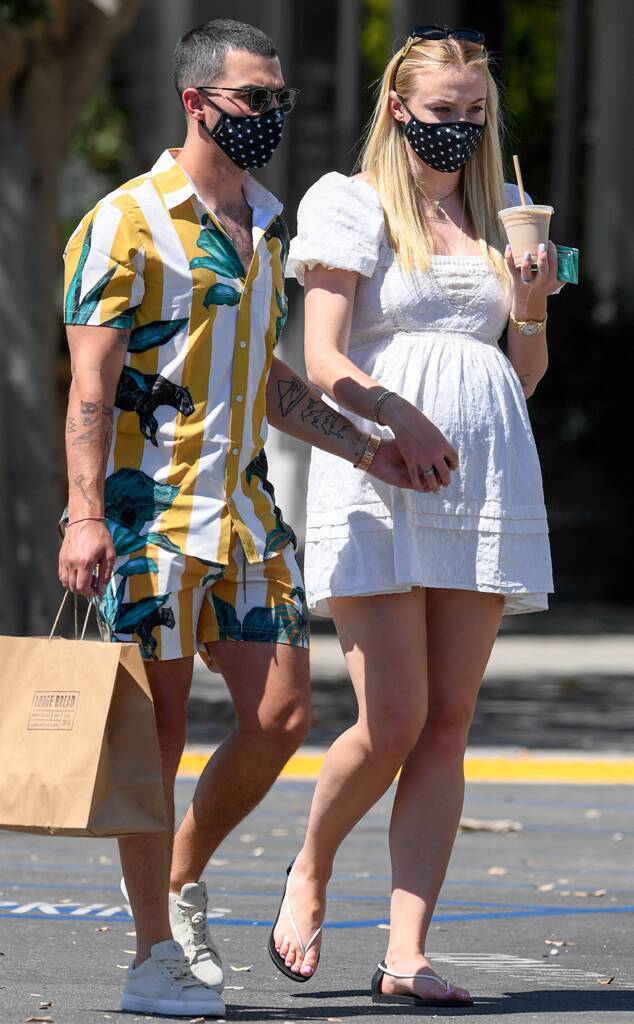 Sophia delivered a baby girl in a Los Angeles hospital on 27th July 2020. Both baby and mother are healthy, the Jonas and Turner families are delighted for the new addition. The baby has been named Willa Jonas.

Sophie has been open about her struggles with depression, she has ADHD and has been taking medicine for years.

She revealed in April 2019 that she was disturbed by the negative fan comments about her character in Game of Thrones and was contemplating suicide.

She has played the character, Jane, on the TV series 'Survive' which struggles with depression.

Sansa is close to Jon Snow (Kit Harington) whom everyone believed to be Ned's illegitimate son, thus Sansa's brother. 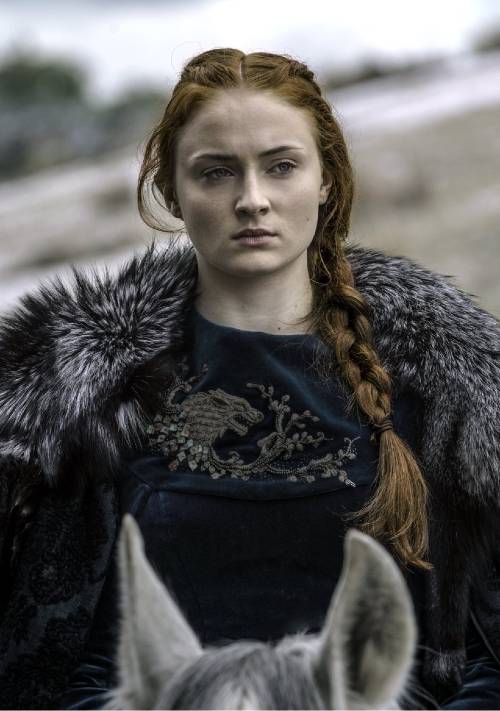 [Sophie Turner as Sansa Stark from GoT]

Rolling Stone magazine named Sophie's character to be the fourth-best character in the series. She received multiple award nominations for her role, including Screen Actors Guild Awards and Primetime Emmy Awards.

Sophie was 14 years old when she started in the TV series. Her drama teacher had encouraged her to audition for the role. She had colored her hair auburn for the role (the character has auburn hair in the book). She attributes her landing the role to her social media following, she says there was another actress way more talented than her, and that she was chosen based on her social media popularity.

She was on a family holiday in France at the time, her mother greeted her with "Good morning Sansa" to announce that she was selected for the role. Sophie burst out crying and jumped into the pool to celebrate.

Sophie appeared in the 2013 Chamber pop song "Oblivion" (album: Bad Blood) by the British band 'Bastille'. It was directed by Austin Peters,  written by Dan Smith and released by Virgin records.

Sophie Turner features in the video as the main character, lip-syncing to the lyrics.

In the 2016 fantasy superhero film written by Simon Kinberg and directed by Bryan Singer, Sophie Turner played Jean Grey, a mutant with telepathic and telekinetic powers. Jean Grey was one of the students of Charles Xavier (played by James McAvoy)

The movie was a super hit in the box-office, with 6.9/10 rating on IMDB

Sophie played the titular role 'Josie' in the 2018 thriller film written by Anthony Ragnone and directed by Eric England.

Sophie plays the high school girl who has just been transferred to a Southern town of Baymont who bonds with Hank, a local recluse (played by Dylan McDermott)

This was Sophie's first lead role.

In the 2019 Marvel X-men comic sequel 'Dark Phoenix' directed by Simon Kinberg, she resumed her earlier character of Jean Grey, a mutant with telepathic and telekinetic powers.

Phoenix entity was unleashed in the film, Sophie studied dissociative identity disorder and schizophrenia as preparation so that she could play the vulnerable Jean as well as the confident Phoenix with equal ease.

According to director Simon Kinberg, Sophie Turner has the lead role in the film. 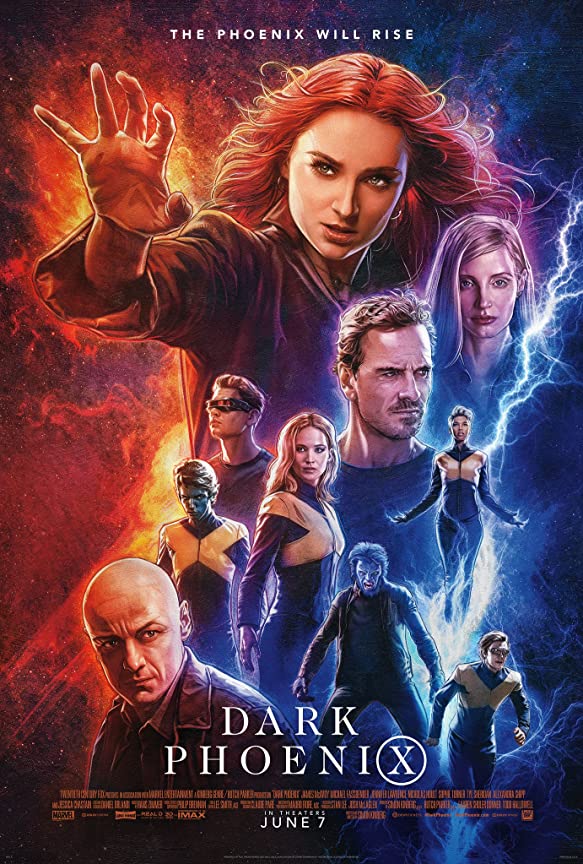 [Sophie Turner in and as Dark Phoenix]

It featured the Jonas Brothers (Nick, Joe, and Kevin) along with the Jonas ladies- Priyanka Chopra, Sophie Turner, and Danielle Jonas.

In the adventure drama series written by Richard Abate and Jeremy Ungar, released on the mobile platform Quibi, she played Jane, one of the two people (other being Paul) that survived a plane crash and isolated in a snow-covered mountain. Jane and Paul have to find a way out of the crash site to return back to society.

The series received mixed reviews from viewers and critics.

What a Man Gotta Do

The Jonas Brothers' music video "What a Man Gotta Do" was released on January 17, 2020. It was directed by Joseph Kahn.

Sophie Turner and her husband Joe Jonas featured playing dance sequences from "Grease". Kevin Jonas and wife Danielle were seen in a tribute scene to "Say Anything..." 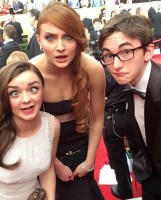 Sophie Turner as Sansa Stark from GoT

Sophie Turner in and as Dark Phoenix 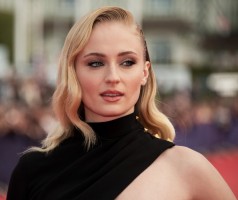 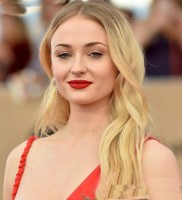 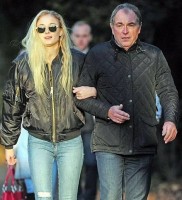 Sophie Turner with her father Andrew

Sophie Turner with her mother Sally