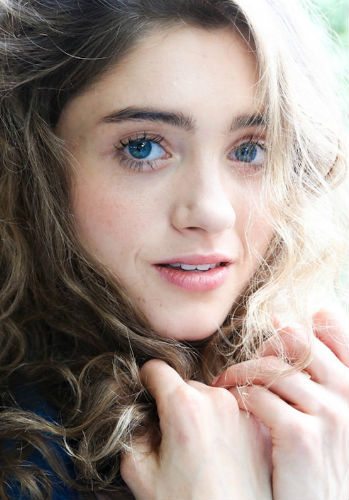 Natalia Dyer is an American TV & Movie actress. She is popular for playing the roles- Nancy Wheeler in Stranger Things, Davina in I Believe in Unicorns (2014), Clarissa Granger in Hannah Montana: The Movie(2009), Grace in Blue Like Jazz(2012). 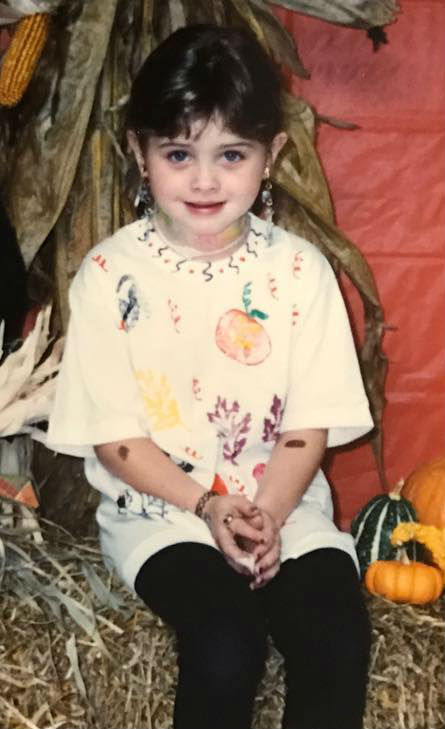 Allen Miles Dyer- a clinical engineering specialist, is her father. Allen is a graduate from Vanderbilt university with degree in Law & Medicine. Allen and his wife Karen met while studying together in the University. Allen & Karen have two daughters- Natalia & Virginia. Allen & Karen are divorced. [17] [18] 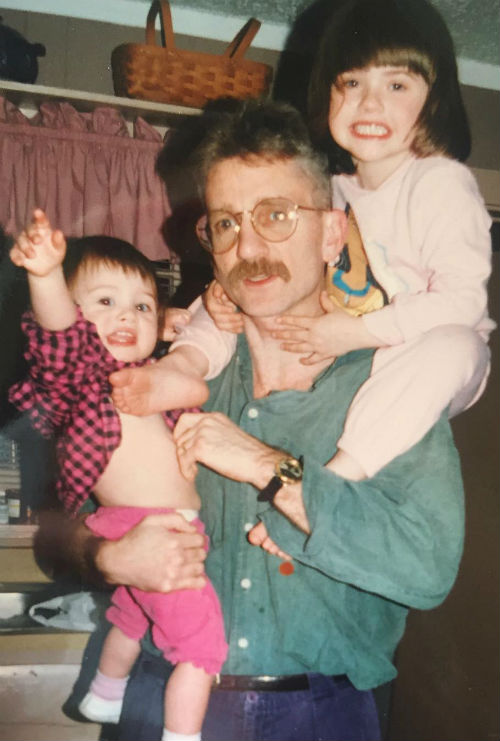 Image: Natalia Dyer (on the shoulders) with Father & Sister

Karen Dyer Young is Natalia's mother- an exercise physiologist & fitness instructor, she studied at the Arizona state university and worked at Vanderbilt University, where she met her future husband Allen dyer. She is separated from her first husband Allen Dyer now and is married to John Young. She lives in Nashville, Tennessee, originally from Kingsport, Tennessee. She has worked at the Vanderbilt Dayani Center for Health and wellness, where she cared for the patients recovering from cancer & stem cell transplant [15] [16]. 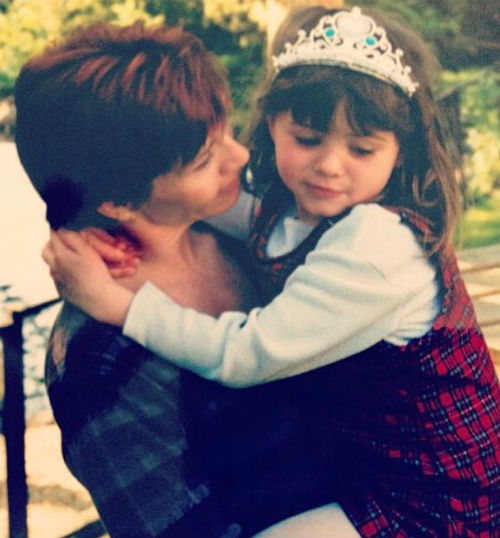 Natalia has two sisters, one a full biological sister named Virginia Dyer & another a maternal half-sister. 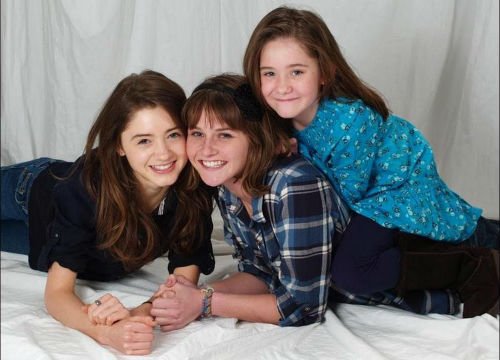 Charlie Heaton and Natalia Dyer have been dating since 2016. Tabloids had been speculating about it since September 2016, it became official when the two made red carpet debut as a couple holding hands in December 2017. Charlie has a son named Archie from his previous relationship. 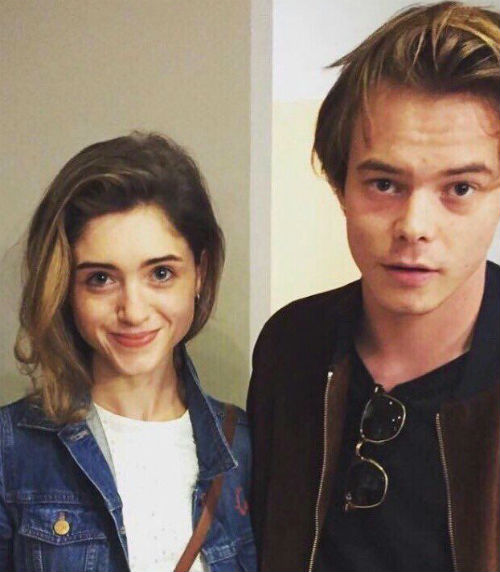 She has modeled for products such as:

Natalia Dyer was in Hannah Montana

Natalia made her on screen debut through Hannah Monatana as Clarissa Granger, she had a very small role to play. Here is a screen grab of her for your viewing pleasure. 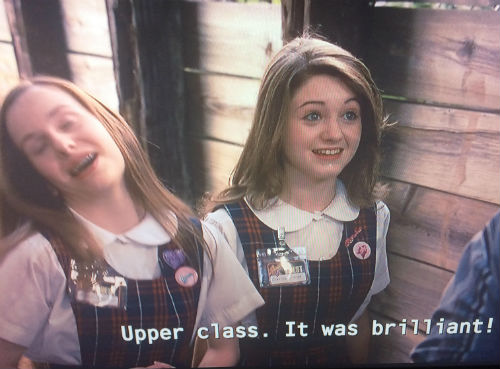 Natalia has a stunning resemblance to Emmy Rossum, she can pass off as her younger sister. Both of them have chestnut hair, big round eyes and adorable smiles. Can you guess who is who? 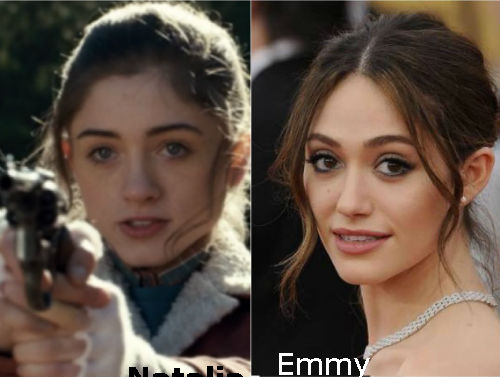 Some fans have compared Natalia with the young version of Mia Sara (of Ferris Bueller’s Day Off fame). Do they look alike? what do you think? 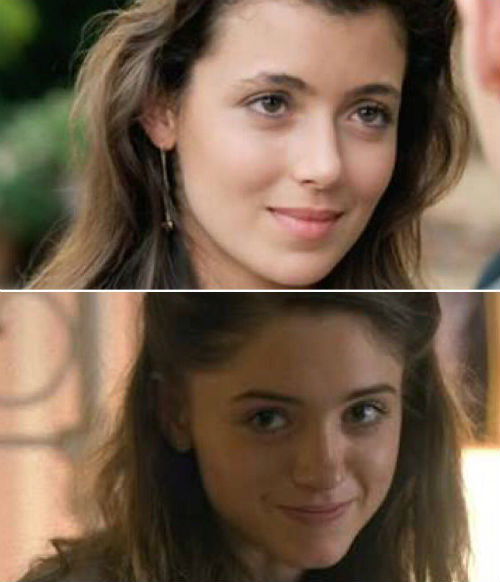 She met her future boyfriend Charlie Heaton on the sets of "Stranger Things".

Stranger Things stands out as one of the notable roles she has ever played on TV. The popularity of the Stranger Things has only increased over time.

Salary: Imdb lists her salary per episode in the 3rd season as $150,000. A handsome sum indeed. 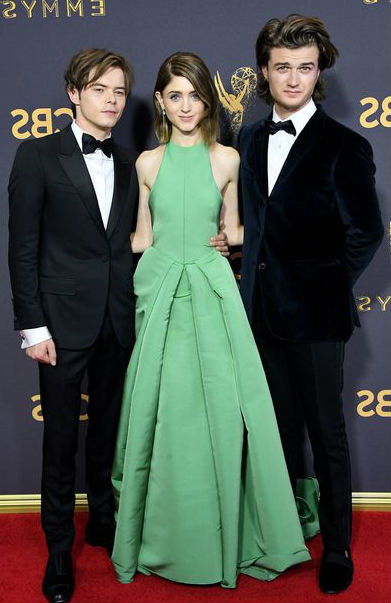 She played Monique in the Romantic Comedy movie The Nearest Human Being (2019), It was written and directed by Marco Coppola; with Charlie Hofheimer, Leticia Peres, Josephine Huang, Aaron Scott Koen in the cast.

In Yes, God, Yes, she plays Alice, a devout Catholic teen from the Midwest. After exploring her sexuality through racy AOL chats she is guilt ridden. She goes to a religious retreat to control her sexual thoughts and suppress her desires. Seeing the apparently devout hiding behind masks she leaves the retreat, on her way she unexpectedly meets a co-traveller who gvies her a better idea of what "good" is. She finals finds her freedom from guilt. The movie was based on the short movie by the same name where Natalia had played Alice. The movie was written and directed by Karen Maine, while Timothy Simons, Francesca Reale, Susan Blackwell played the other important roles.

In the science fiction After Darkness directed by Batan Silva, she plays Clara Beaty. As the Sun is dying out and the earth is turning dark, the Beaty Family must find reconciliation. They must mend their bonds and let go off grudges. Kyra Sedgwick, Tim Daly, Valorie Curry, John Patrick Amedori, Sam Daly play the important roles.

In the family drama Mountain Rest, she plays Clara, the daughter of Frankie(Kate Lyn Sheil) and granddaughter of an aging popular actress Ethel (Frances Conroy). Clara who has never met anyone from her extended family starts a liking for her grandmother, her conflicts with her mother Frankie grow, while Frankie has her own troubles in love life. Shawn Hatosy, Joshua Brady are seen in the main cast.

In the short movie After Her Natalia plays Hailey- a teenage girl living in a small two, who disappears. Christopher Dylan White plays Callum a past friend of Hailey who comes back to the town and visits places he and Natalia past visited. Aly Migliori directed the short film, Kasey Buckley played Connie.

She appears in the musical video "Wild Love" by James Bay

In the short movie Yes, God, Yes Natalia plays Alice, a teen catholic who has found her exploration of human sexuality a pleasant experience, but is overcome with guilt. The story is about her finding the release from guilt. John Doherty, Joe Reece, Merissa Czyz, Suzanne Lenz also play supporting roles.

She plays Marie in the Romantic Drama film Long Nights Short Mornings, Shiloh Fernandez played the lead role of James. Ella Rae Peck (as Katie), Paten Hughes (as Monica), Christine Evangelista (as Natalie), Cassandra Freeman (as Anna), Helen Rogers (as Lorraine) also appear in the movie. The story is about the romantic life of a young man in New York.

In the short Drama thriller Till Dark, Natalai plays Lucy, one of the 3 childhood best friends, other two roles were played by Ian Colletti & Will Denton. The story is about the obsession of teen boy when he finds out that his two best friends are spending time together privately.

She plays Adeline in the short movie The City at Night. The story is about the changes in behavior of people when something out of the ordinary happens. Doua Moua (Tsheej), Jack Burk Goldman (Barber), Alexander Rotella are also in the cast.

She played Davina- a high school freshman from San Francisco in the Drama movie I Believe in Unicorns by Leah Meyerhoff. The story revolves about the troubles of young lovers, the struggles in their relationship, her escaping to a fantasy world as the relationship turns abusive. Julia Garner plays her best friend Cassidy. Peter Vack, Amy Seimetz, Toni Meyerhoff play other important characters.

She is seen portraying Banshee in the fantasy horror film Don't Let Me Go, The story is about an ailing father taking his family into the woods in an attempt to feel the closeness the family once had. Isabelle Fuhrman, Joel Courtney, James Le Gros, Peter Bogdanovich are in the cast while Giorgio Serafini wrote and directed the movie.

In the short comedy drama Too Sunny for Santa, she plays Janie, the daughter of Jim Ferguson. Her mother is dying and would not be living long. Jim and Janie try to create Christmas for their dying loved one.

In Hannah Montana: The Movie, Natalia has appeared in minor part as Clarissa Granger. The movie was the beginning of the movie career of Miley Cyrus. Apart from them- Emily Osment, Jason Earles, Mitchel Musso, Moises Arias were also in the movie. 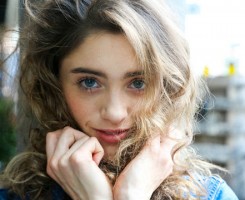 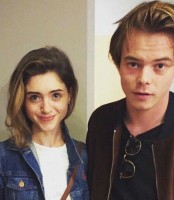 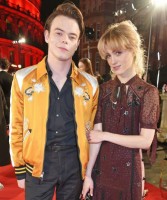 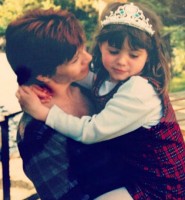 Natalia Dyer childhood with her Mother 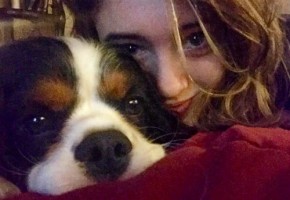 Natalia Dyer with her pup Ozzy 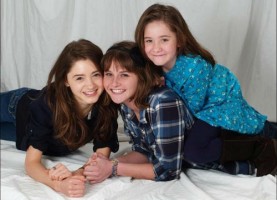 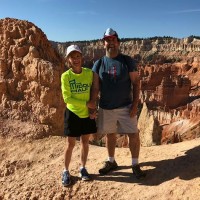 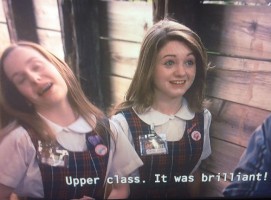 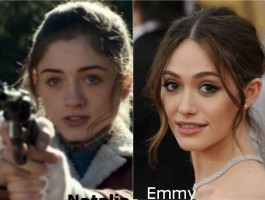 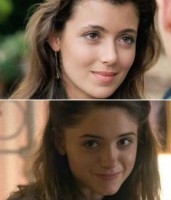