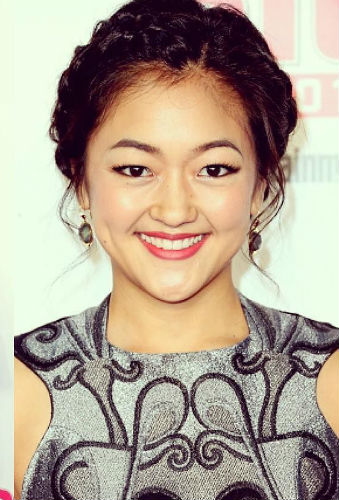 She had been interested in sports and athletics as a kid, she first started playing basketball at the age of five and played for nine years, till she was 14. She later took interest in dancing in the 7th grade of her high school, it was there that her teachers and colleagues encouraged her to become an actress, as actresses make money [2]. 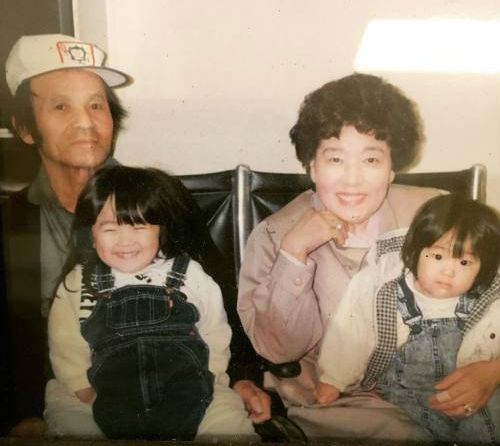 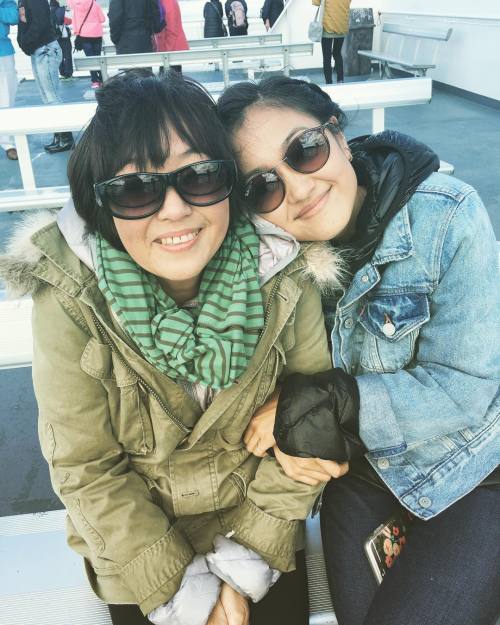 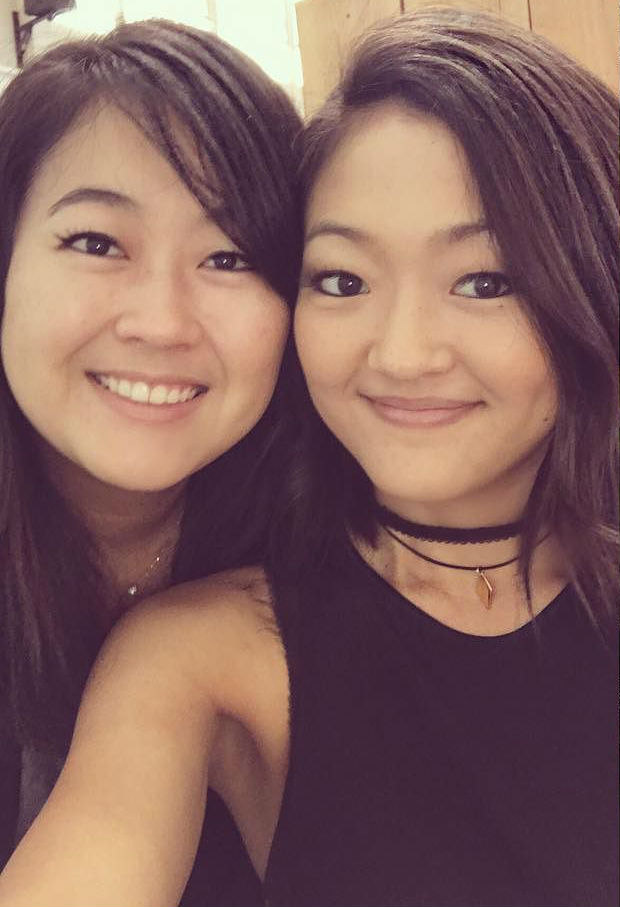 Engagement: Amy Okuda got engaged to to her high school mate and boyfriend Mitchell on 23rd April 2017. They had been dating for 5 years before that. The love blossomed between the couple on a work Europe trip. 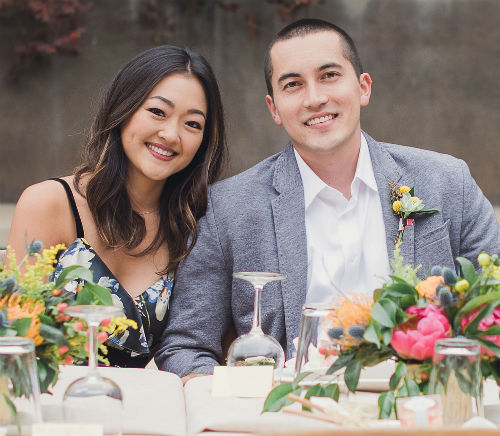 Wedding: Amy and Mitchell got married on 3rd of November 2018. 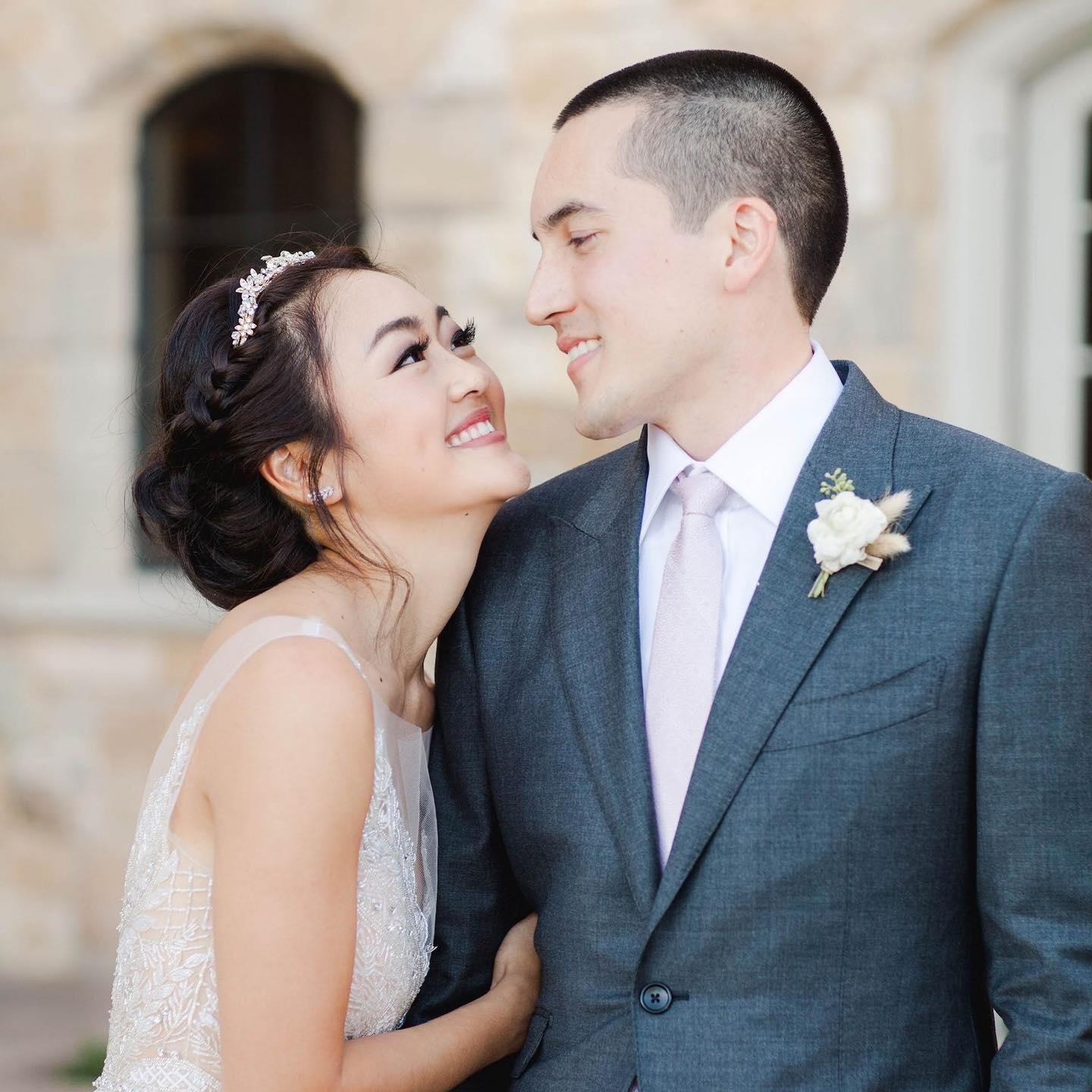 Amy made her acting debut in 2007 in one of the episodes of the popular TV series "Californication". In the same year, she landed a main role in the youtube comedy web series "The Guild" created by Felicia Day. She appeared alongside Felicia Day, Vincent Caso, Jeff Lewis, Sandeep Parikh, Robin Thorsen and others. She appears in about 60 episodes of the series.

In 2010 she appeared in NASA's Spitzer Space Telescope educational video. Her character in the video talks about the newly discovered giant ring around the planet Saturn using the same Telescope.

In 2011, she appeared in the parody science fiction music video "I'm Frakking You" (a parody of Enrique Iglesias's "Tonight (I'm Lovin' You)" ). In this break.com music video, Alessandra Torresani, Kunal Nayyar, and Matthew Brown appeared alongside.  In the same year, she appeared in one of the episodes of the TV series B-Sides. She appears as "Elf Amy" in the short video "Elf Saebers".

In 2012, she played an asian girl character in an episode of the TV series Jane by Design. Appeared as Tinkerbell in "The Guild" music video "The Guild: I'm the One That's Cool".  She appeared in multiple TV Series roles in 2012, as Lynn in "Away we happened" (on the  YouTube channel Wong Fu Productions, alongside JEN Chae, Victor Kim), as Amy in "My Gimpy Life", as Hideko Wantanabe, . In the youtube series BFFs (on YOMYOMF)  she appeared as Sam in 6 episodes.  In the Zombie Series humorously titled "Bite Me", she played Zombie Kelly, she appeared in 5 of the episodes.

In 2013, she appeared in the horro film "Chastity Bites" as  Ashley Thorne. In the drama movie "It's Dark Here", she played a mean girl. Appeared in one of the episodes of Disney XD sitcoem series "Crash and Bernstein" as Slater. Played the role of character Sue's (played by Eden Sher) tennis partner in an episode of the series "The Middle".

In 2014, she first appeared in the first season finale of the FOX policy comedy series "Brooklyn Nine-Nine" as Sgt. Terry Jeffords's (played by Terry Crews) former girlfriend Chiaki. She appeared again in other episodes of the series. She appeared as Chelsea Ansell in the episode "Go It Alone(2014)" of the medical drama Grey's anatomy. She played Amy in the short film "Operation Barn Owl". She played Rolanda in the TV movie "Bleach". She played Cammie in an episode of the series Awkward. In the short horror comedy "House Meeting" she played Ghost Maid.

In 2015, She played Becky in the series "A to Z", She played Lurch's wife Marci in the movie "The Wedding Ringer". In the horror thriller "Bound to Vengeance" she was one of the captive girls. In the Romantic Comedy Drama "Hello, My Name Is Doris" she played Des.  In the dystopian sci-fi series "The Man in the High Castle" she appears as Christine Tanaka in two episodes.

How to Get Away with Murder 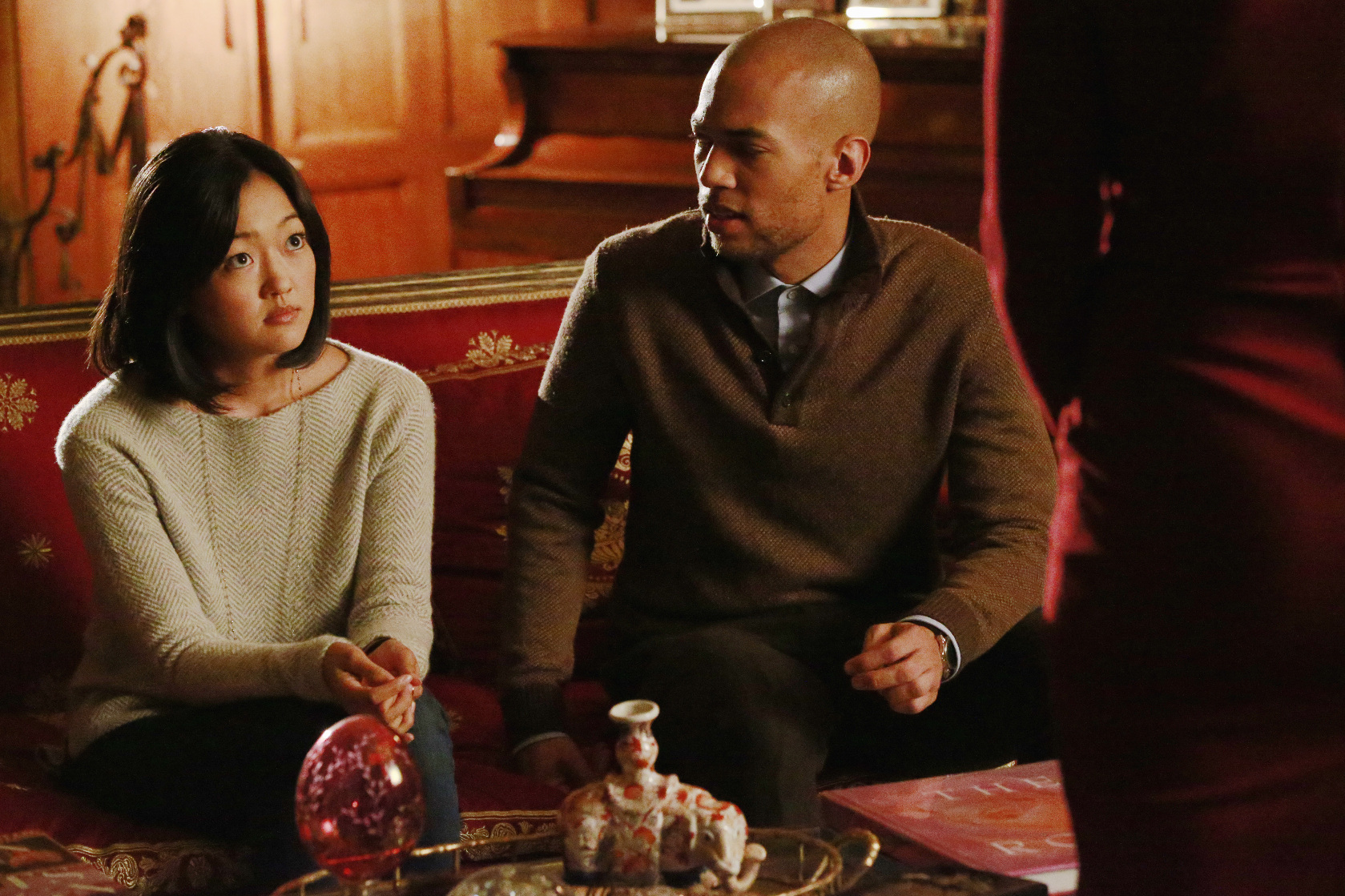 Amy appeared in 11 episodes of the 2nd season of the ABC legal thriller "How to Get Away with Murder". She played Catherine Hapstall.

In 2016, she appears as Sheryl in the short film "The Sibling Code".  In the horro comedy series "Scream Queens" she played Anna Plaisance. She played Erin in the short movie "All Exchanges Final".  She played Jessica/ Gayle in the comedy fantasy drama "The Good Place" in five of the episodes.

She played Zoe in the series MacGyver in 2017. 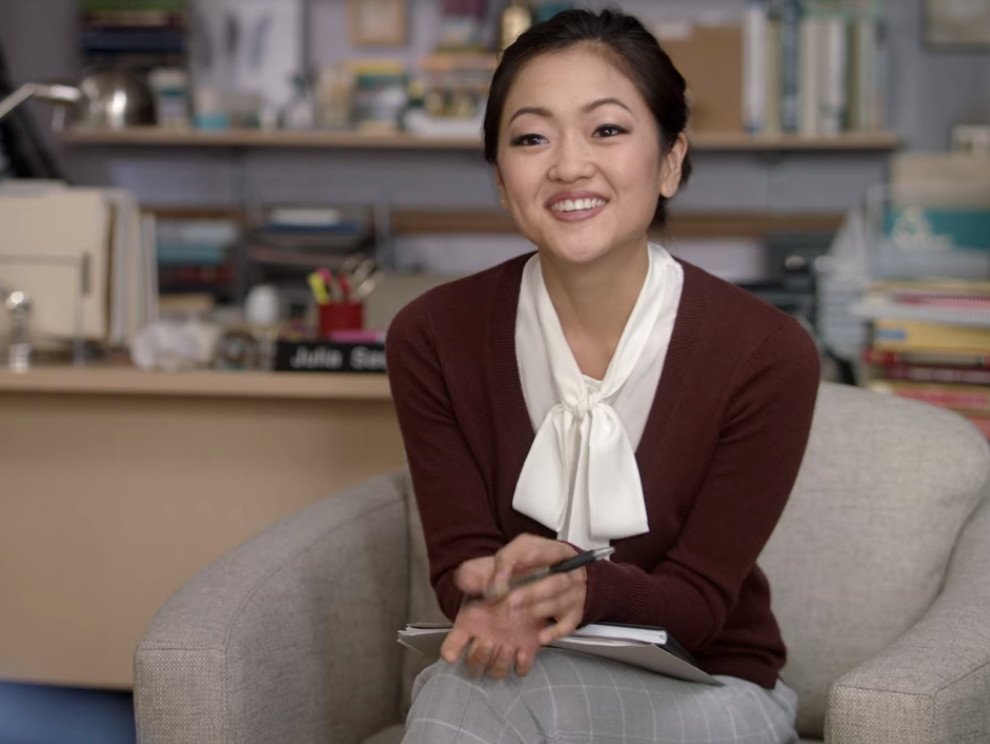 In the Netflix comedy TV series Atypical, she plays the character Julia Sasaki, as the therapist of protagonist Sam Gardner (played by Keir Gilchrist) an Autistic teenager, who has a crush on her. She has a main role in the season 1 & 2, a recurring role in season 3 and guest role in season 4.

In 2018, in the TV movie "So Close" she played Crystal. She appeared as "Wendy, the comic cop" in the TV mini series "Best. Worst. Weekend. Ever."

She voiced the character Sentinel Ryssa Brin in the 2019 video game "Anthem". In the "The Good Place" sequel " "The Good Place Presents: The Selection" she reprised her role as Gayle.

She appeared as "Ticketing Agent" in the comedy family movie "Home Sweet Home Alone" in 2021. In the short film "Melinda's Wish" she plays the titular role Melinda. 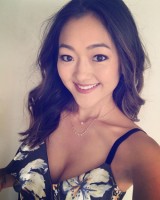 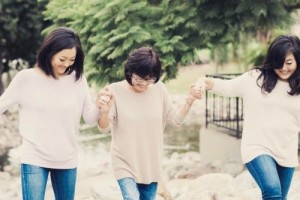 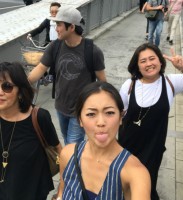 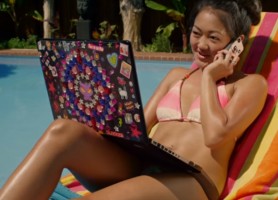 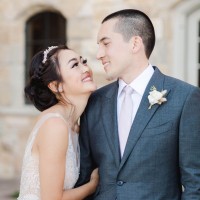 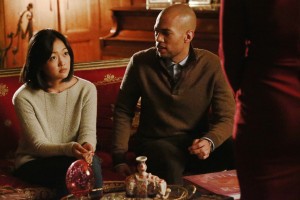 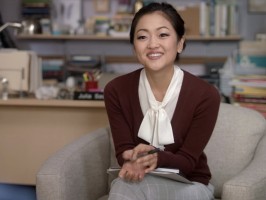 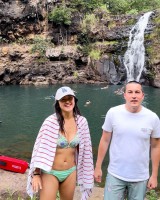 Amy and husband Mitchell with their pet Lola